Going to College…back in the Day…even girls!

You are here:
Leave a commentfamily history 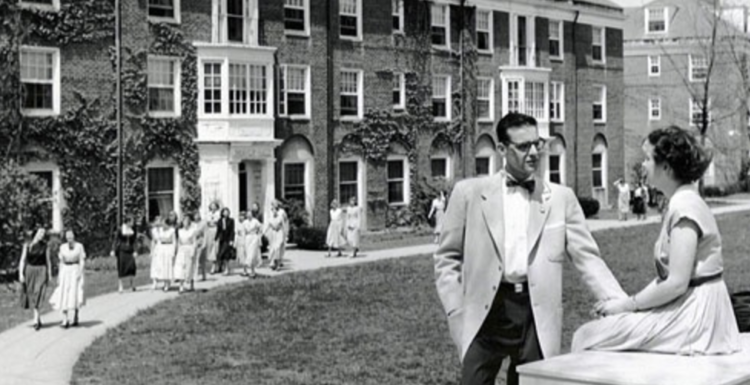 In 1870 America, there were only 500 public high schools with enrollment of about 50,000 students (U.S. population was almost 40 million in 1870 as per census data). At that time, enrollment had opened to accept females, mostly to be trained as teachers. Reading, writing and arithmetic curriculums were also expanding to train working class youth in skilled trades to meet the needs of a country fast changing in the second phase of the Industrial Revolution. (Read more on this topic here)

While secondary schools were growing in many states, many did not have courses that prepared students for college, thus students could not pass entrance exams. Many colleges in that era, offered “preparatory schools,” to fill the gap, but also to expand their college student enrollments. Families of means sent their children to such college based academies, particularly when those schools were close to home.

Two of Eva’s brother’s, David and James also attended Illinois Wesleyan University. James was a freshman in the Preparatory courses during the same period Eva attended. James continued his studies and was later listed in census records as “professor of education,” then a few years later on the Board of Education in Omaha, Nebraska. David Gillan, graduated in 1881. In the Illinois Wesleyan University Alumni Roll, published in 1929, David is shown as having achieved a B.A., and M.A. [1]  David H. Gillan, served as a Methodist Minister in southern California for twenty-five year; he also established a date farm there.

The Academic and Teachers Course, as the preparatory school at Illinois Wesleyan University was called, gave the following description of the course in the university’s 1879 catalog:

“This course is arranged with reference to a thorough preparation for college; also to qualify young men and women for teaching in common and graded schools, and further, to furnish the basis of a business education to those whose time will not allow them to complete a full college course.” [2]

James and Jane McClure Gillan, parents of Eva, Mary, Addie, James M. And David H. Gillan were strong advocates for education for both males and females, as evidenced by sending daughters to college as well as sons. James and Sarah were immigrants from County Antrim, Ireland, both educated and literate. James was instrumental in the establishment of schools in McLean County, Illinois.

Years later, Eva Gillan Samuel, enrolled her three children in the preparatory school, Academy (1907) of Baker University in Baldwin City, Kansas. She found the high schools in Kansas then did not prepare her children for further education as her father as discovered back in 1879. From the Baker University Catalogue of 1906-1907, in explaining the existence of an academy at Baker University, ‘many localities do not provide academic opportunities for students which prepare them for college course work;” further the statement cites lack of libraries, literary societies, lecture courses and elementary knowledge of grammar, arithmetic, physiology, US history, government and geography required to pass entrance exams for college. The Academy at Baker University had four courses of study: Classical, Philosophical, Scientific, and Literature and Art. Graduation from the Academy ensured acceptance into the Collegiate Department without further examination.’[4]