You are here:
Leave a commentgenealogy research, Vital Records 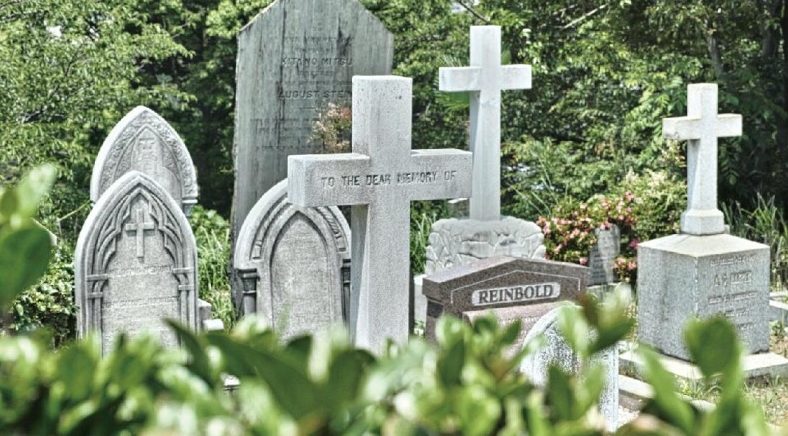 By Jill Moore
When I lived in Ohio, I spent many crisp autumn afternoons at the Green Lawn Cemetery in Columbus, walking the peaceful grounds and snapping some of the most beautiful and haunting cemetery pictures I have ever taken. These cherished photographs became even more meaningful when my genealogy work revealed that so many of my ancestors are there on those same lovely grounds.  In December though, I was left speechless at reading that vandals caused an astounding $1.25 million dollars in damage to the cemetery, smashing tablets upon other stones and shattering a bust of a War of 1812 veteran and Ohio Supreme Court Justice.

While the devastation perpetuated at Green Lawn didn’t make national news, Vice President Mike Pence’s clean-up efforts and outrage at the damage sustained to nearly two hundred headstones at the Chesed Shel Emeth Cemetery, helped spotlight a problem that has grown to near epidemic proportions in recent years yet the attention it garnered was regrettably far too brief. The community concern and conversation usually end when no one can offer viable suggestions on how to prevent the damage being done or when it comes time to fund repairs.

Unfortunately, the damage hasn’t been constrained to just cemeteries. Countless historic sites, churches and schools have also been on the radar for destruction, mayhem and theft.  Players in search of a rare Pokemon vandalized the Revolutionary War era Fort Phoenix in Massachusetts and turned the grounds into a “minefield.” The Gunsmith Shop at the Old Bedford Village was robbed of all six of their original longrifles and Plimoth Plantation, a living history museum, had character houses robbed of reproduction body armor sets that were valued at nearly three thousand dollars. Trespassers to the ruins of the arsenal on Bannerman’s Island lit a campfire that turned into a brush fire that burned half an acre of the grounds and had to be extinguished twice after it flared a second time. In Virginia, five teenage boys spray painted hateful racial symbols and slogans on the Ashburn Colored School, a historic black school.

There are countless primer articles regarding how to get younger children interested in their family history by including them in cemetery visits and playing games with “ancestral flashcards” but little consideration has been given as to what to do when they’ve grown older.  Let’s face it – talking to teens can be a daily challenge even when it comes to the most trivial of things, so how do you continue to foster their respect for these sacred places without harping on them to the point they’re tuning you out completely?  How can you help ensure that they’re not the ones knocking over headstones, spray painting churches and causing havoc once they leave your sight?

Teenagers are constantly looking for a sense of how they fit into the world but dishing out random family facts or giving them an unwanted history lesson isn’t going to help them find nor make that connection to their family, the community nor the world.  It may sound overly simply, but if you find ways to personalize it for them and allow them to develop an interest on their own terms, they will care about it more.  By urging them to take an active part in preserving the past, including that of their community and of their family, they’ll likely find a way to resonate with it.  I spoke with Linda Standish, town historian of Washingtonville, New York, Marianne Greenfield, a cemetery restoration expert and Randel L. Rogers, member of the Board of Trustees for Green Lawn Cemetery in Columbus, Ohio, who offered some great suggestions to get teens involved and interested in history: