DNA Testing for Genealogical Purposes: A Tale of Two Outcomes

This story began with a request to correct a spelling error in an article I’d written about a 1913 coal mine explosion in Dawson, New Mexico.  To Doug Simpleman the error was especially important to see corrected.  The misspelled name belonged to his great grandfather Roy Simpleman.

I was happy to correct the error and we began corresponding back and forth over a period of time as Doug shared with me about his great grandfather.   He had been researching for awhile to uncover Roy’s parentage, specifically his birth father.  Roy was born Refugio Badial to Ramona Badial in 1893 and the Catholic church record indicated he was illegitimate.

Approximately two-and-a-half months later Doug and I began another exchange of emails which culminated in a breakthrough – a Eureka! moment if you will.  (The story is quite involved and too long to include here, but if interested please click here to read the story).  Suffice it to say, clues began falling into place and it seemed that together we had uncovered the likely scenario related to his great grandfather’s parentage.  All clues pointed to a man by the name of George Kyle Zimpelman.

Still, Doug wanted definitive proof of his lineage and had plans to submit to a Y-DNA test, one that tests the paternal line.  Y-DNA passes directly from father to son to grandson and so on without change.  Doug attempted to contact possible relatives to participate, but regardless of whether he found others to participate, Doug was determined to take the Y-DNA test.  A few months went by and I received an email from him informing me of the test results which had taken three months to process.  That day was also Doug’s forty-fourth birthday.

Exactly when George immigrated to the United States is unclear.  However, by 1854 he had mastered the skills of carpentry before abruptly changing to gunsmithing.  In 1856 he began farming and raising stock around Austin until the Civil War.

George Barnhart Zimpelman enlisted in Company D of Terry’s Texas Rangers in July of 1861.  He was sworn into Confederate service on September 5, 1861 and served until May 1865.

Upon his return to Texas George Zimpelman served as Sheriff of Travis County, a dangerous and difficult job during the Reconstruction era.

Obviously, Doug’s DNA results were both substantiating and gratifying, and his ancestry now includes a connection to early Texas history.  A few months later another client expecting substantiation regarding Native American ancestry was disappointed and a bit bewildered.

Tom Mason had always assumed he had Native American ancestry from his father’s side of the family.  While I may yet find a link on the paternal line, as my research unfolded I found an unmistakable one through his mother’s line (Flippin).  However, when Tom’s DNA results arrived we were all dismayed – there were no indications of even one drop of Native American blood!

Research seemed crystal clear as I found Tom’s second great grandmother Sarah Ann Bryant had married John Looney Flippin in Gibson County, Tennessee in 1838.  Here I began finding significant clues as I uncovered extensive research about this family which clearly links him to his fifth great-grandfather Oconostota, one of the great Cherokee chiefs.

Books have been written about this particular ancestral line, including one by Tony McClure called “Cherokee Proud”.  McClure descends from Oconostota and is pictured next to a memorial stone in Gibson County, Tennessee which lists Sarah Ann Bryant Flippin as a direct descendant of Oconostota.  So, why didn’t even a minuscule bit of Native American DNA show up?

According to Crista Cowan, aka “The Barefoot Genealogist”, missing Native American DNA is more than likely due to one of two things – either none of your ancestors were Native American or the DNA is too far back to detect.  She states it’s still possible to have Native American ancestry (and those stories passed down may very well be true) but perhaps it’s much further back than you believe.

DNA works like this: you inherit 50% from your father and 50% from your mother, who in turn inherited 50% from their parents and so on.  However, that doesn’t necessarily mean you get an even 50% of everything they have.  Rather, you get a random 50% of their overall genetic makeup. 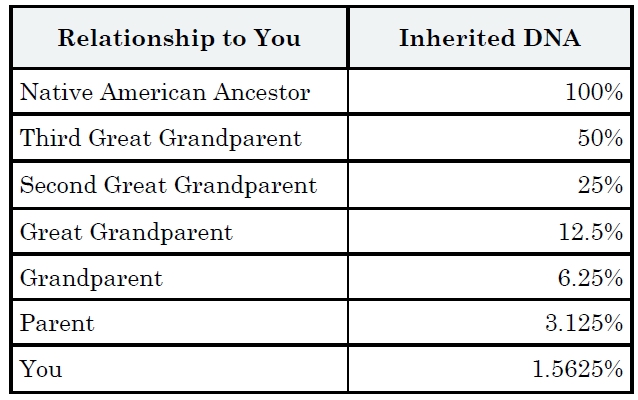 But, I Know For a Fact I Have a Native American Ancestor!

If the answer to the lack of Native American DNA is “too far back to detect” try having other family members test. This includes not only siblings, but parents, grandparents, first cousins, aunts and uncles – anyone close enough to you who would have the possibility of picking up the Native American DNA which may have eluded you and your genetic makeup.

If you are claiming Native American ancestry, at a minimum you must understand where the tribe lived and whether it matches the migratory patterns of your ancestors.  If not, then you either have a family myth or perhaps it’s another tribe.  For Tom Mason, DNA muddled everything.

These two stories, with very different outcomes, clearly demonstrate the highs and lows – pros and cons – of DNA testing for genealogical purposes.  Before embarking on your own DNA journey, awareness of potential rewards and pitfalls is essential.

Crista Cowan, “Why is My Native American Ancestry Not Showing Up?”, accessed August 23, 2016,  https://www.youtube.com/watch?v=geE7zsehccY

Stressful Legacy: Trauma Can Be Passed Down Through DNA
September 11, 2017
Leave Comment