7 Strange Interests of Our Victorian Ancestors 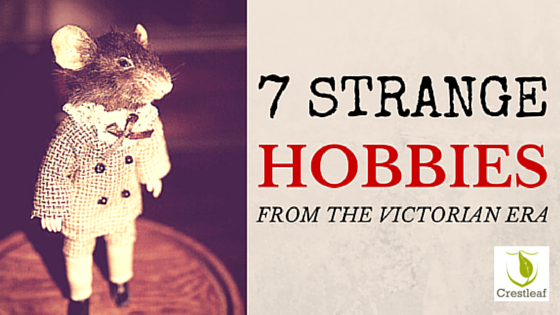 Your 19th Century Ancestors Were into Some Seriously Weird Stuff

Photo Credit: Wurzeltod via Compfight cc
Back in the 19th century before modern technology took over the entertainment scene, our ancestors were forced to figure out how to alleviate their boredom. Sometimes, reading a book or story telling just didn’t cut it. In addition to their fondness for dressing their pets as humans for family portraits, our Victorian ancestors had a plethora of other odd hobbies that were also surprisingly popular back in the day.
The following interests of your Victorian ancestors will make your weird hobbies seem totally normal!

Strange Hobbies from the Victorian Era

Photo credit: elreinodelexceso.net
Without iPhones or the Internet for entertainment, your Victorian ancestors (whether upper or middle class) would get together with friends and family members, dress up in crazy costumes, and then pose for each other enticing laughter and applause. This was a very popular interest at the time — and perfectly normal. If you can imagine doing this for your friends today, then you’re just as odd as your ancestors were!

Photo credit: Wikimedia Commons
Sometimes, our Victorian ancestors could be fairly judgmental and enjoy laughing at people who looked strange. In both 19th century England and the United States, freak shows were at the height of their popularity and considered commercial successes. A “freak show” was an exhibition of biological rarities — think people with secondary sexual characteristics, and those with rare diseases that manifested outwardly making their physical appearances shocking.
Sometimes this was the only way the “freaks” could make an honest living — all while passersby gawked. Yikes. Queen Victoria actually loved freak shows herself. Could you even imagine the Queen of England or the President of the United States participating in these demeaning behaviors today? It would truly be considered politically incorrect — and downright mean!

Photo credit: charlesfosterofdensen on Tumblr
When you think of taxidermy, you likely think about Uncle Dan’s prized, stuffed deer head that he proudly displays on the wall of his den. Or, perhaps your mom even called upon a professional taxidermist to preserve your beloved family dog. But what you probably don’t think about is the act of anthropomorphic taxidermy — a hobby that delighted Victorians of all ages. With this type of taxidermy, mounted animals were either dressed as people or displayed in the home as if they were engaging in human activities. Walter Potter was the most successful and well-known anthropomorphic taxidermist creating scenes with everything from kittens playing croquet, to rabbits writing on slates in a schoolhouse.

Photo credit: Steam Punk Things
Your ancestors from the Victorian era were likely avid collectors. Sometimes, they would stick to one type of item for their collections, but their curiosity cabinets also displayed some rather outrageous things that didn’t fit together at all. Curiosity collections would contain “curiosities” spanning everything from weird botanical finds, shrunken heads, geological specimens, bones found in the woods, shells, old weaponry and more. The more odd the collection was, the better!

Photo credit: Darwin Country
In the Victorian era, your ancestors were also obsessed with exotic plants. So much so, that not only were their gardens filled with pretty flowers, but their wallpaper, clothing fabrics, jewelry and more fashion items were botanically-themed. Not too strange, right? Well, by 1855, pteridomania was all the rage. In other words, your ancestors loved hunting for ferns and cultivating them. Fern expeditions were popular in Europe, Asia and other other countries where Victorian people could find and bring wild fern specimens home. It may sound like another walk in the park to you, but fern hunting was actually quite dangerous — exactly why your ancestors were thrilled to go on the hunt!

6. Communicating with the Dead

Photo credit: Steam Punk Circus
Spiritualism was at its peak during the late 19th century. And as you likely already know, your Victorian ancestors were obsessed with the dead, and for good reason. Back in the Victorian era, practically everyone experienced a death of at least one of their immediate family members. People living in the 19th century thus had an affinity for the afterlife that fueled their hobby of performing and participating in seances. During a seance, mediums would help your ancestors communicate with deceased family members and friends. Even if it didn’t actually work, it helped your ancestors reach loved ones and feel more at peace.

Photo Credit: liquidnight via Compfight cc
One of the most creepy and popular interests your ancestors participated in during Victorian times has got to be post-mortem photography. As stated previously, our Victorian ancestors were very much obsessed with the dead. So much that they photographed dead family members and posed with them for family portraits. Even when a family pet would pass away, families would pose for memorial photos with their furry friends. Yes, this may freak you out a bit, but it was a normal photography practice back then.

Have you found any Victorian photos where your ancestors are participating in strange hobbies?

Let us know in the comments!

This entry was originally posted by Crestleaf in Family Photos, Genealogy Fun and tagged creepy vintage pictures, strange Victorian photos, vintage family photos on August 19, 2015 by Natalie L.
Like what you read? Subscribe to the Genealogists.com blog above and automatically receive our next article.