What Your Ancestors Think About Your Selfies 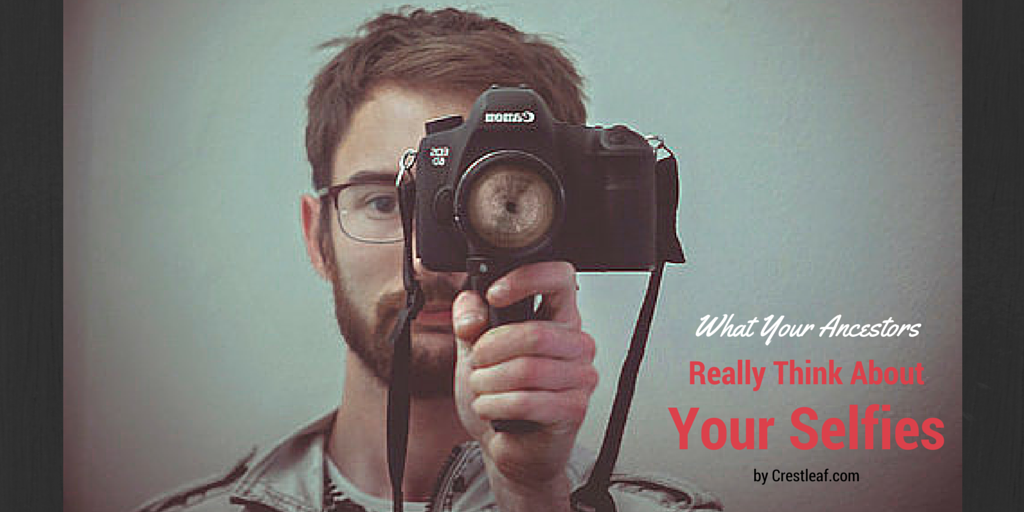 Would They Find Our Modern-Day Pictures Bizarre?

As digital technology has evolved to take over practically every aspect of our relationships — from forming new friendships, to dating and even staying in touch with family members — it’s only natural for us to turn to our smartphone cameras to document and share our lives online in picture form.
And for better or worse, the fascination with the modern-day ‘selfie’ is still a strong one, especially with younger people.

Photo Credit: Ben K Adams via Compfight cc
If you aren’t familiar with the term, pop culture suggests that a ‘selfie’ is created when you take a picture of yourself with a smartphone or small camera for the purpose of sharing on social media. Some studies show this ‘selfie generation’ is linked to narcissism and could be detrimental to society as young people are turning more inward and growing less compassionate and aware of the bigger issues going on in the world.
This got us thinking that if our ancestors were alive today to witness our ‘selfie’ photography skills, they would probably find this behavior quite bizarre. And wouldn’t they also agree with experts that we’re now completely out of touch with life itself?

The Truth About Our Ancestors and Selfies

The truth is, selfies have been in existence since the first one was snapped back in 1839 by Philadelphia photographer, Robert Cornelius. Little did Robert know that this vintage daguerreotype photo would later evolve into what we now know as the modern-day selfie. Surprisingly, the first-ever selfie looks better than you’d think it would.

Photo credit: Library of Congress
Later in the 1900s, our ancestors got much more innovative with their self portraits as the first “mirror selfies” emerged, a trend we also find in the modern-day selfie.

Photo credit: FOX PHOTOS/HULTON ARCHIVE/GETTY IMAGES
And vintage selfies of our ancestors don’t stop there. In fact, the father of photo journalism, Mathew Brady, attempted to take a series of selfies with his photography equipment in the 19th century.

Photo credit: Library of Congress
Also, if we use the term ‘selfie’ a bit more loosely, you could say that the selfie was invented as far back as the 15th and 16th century when Leonardo Da Vinci and Michelangelo created their own selfies sans camera. Rembrandt even sketched a selfie of his own — complete with the ‘fish lips’ pout that so many young people these days pose with in their own selfies.

Photo credit: Wikimedia Commons
Perhaps these innovative, famed artists from yesteryear were on to something long before the modern-day selfie emerged. Some of today’s psychology experts say that selfies aren’t necessarily linked to narcissism, but rather, self-exploration — an art form in and of itself.
But even though the selfie originated long before smartphone cameras came to be, it was much more difficult for your ancestors to create self portraits on their own given the photography equipment they had to use. Because of this, most of your family members from the Victorian era more than likely had their photos taken and processed professionally — a very time-consuming process.
And now, with over 1 million selfies being taken each day, it just goes to show how much easier technology has made it to take self portraits on our own and instantly share them with the world. The selfie won’t be going away anytime soon!
So what would your ancestors REALLY think about your selfies?

Photo credit: National Media Museum on Flickr
As you can see above, our ancestors were all about the selfie-taking, too! Perhaps our behavior wouldn’t be bizarre to them since they were familiar with this photography technique. In fact, if they were here today, we’re willing to bet they’d jump right in for a group selfie with the rest of the family!

Have you stumbled across selfies of your ancestors while conducting family history research? Let us know in the comments!

This entry was posted by Crestleaf in Family Photos, Genealogy Fun and tagged ancestors, vintage photos on June 9, 2015 by Natalie L.Like what you read? Subscribe to the Genealogists.com blog above and automatically receive our next article.