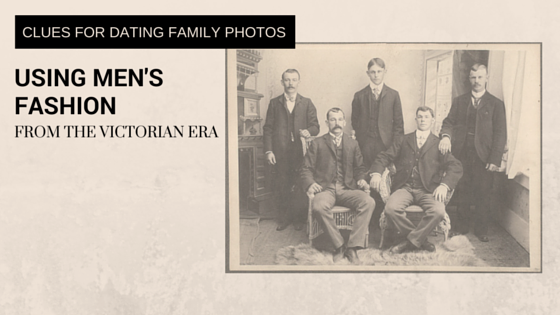 If you’re hitting a brick wall when it comes to identifying family members in old photos from the Victorian era, you’re not alone. Even the most seasoned family historian will run into this headscratcher from time to time as Victorian fashions throughout the time period can look very similar to the untrained eye.

via Compfight cc
But just as you can decipher the dates of Victorian family photos by photo type,women’s clothing styles and hairstyles, you can also do so by using fashion hints found in men’s clothing from the Victorian era.
This article will help you date old family photos and identify ancestors by breaking down men’s Victorian era clothing style characteristics by decade. Keep in mind that the descriptions are generalities and you could end up coming across exceptions to these clothing clues during your research.

In the Victorian era, men’s daily dress was more formal than it is today. This was especially true in the 1840s when men’s clothing offered tightly tailored coats and trousers. In the early 1840s, shirts contained high straight collars with thin cravats worn in a bow tie style. Later in the decade, cravats were wider and fabric was held in place by frames.

Photo credit: lib.harvard.edu
What to look for: Low, tight-cinched waists, rounded chest and flared frock-coats giving the illusion of an hourglass figure. Cutaway coats with fitted sleeves. Wide lapels.Tight trousers and waistcoats, high upstanding collars with neckties tied around them. Hair was worn long and over the ears quite a bit. Sideburns were also popular.
Tip: If your ancestor is wearing a military uniform, a fitted double-breasted coat could let you know that the photo was taken in the 1840s.

1850s men’s fashion was still considered formal, but clothing was looser, less tailored and made a statement with embellishments. During this time, men’s frock coats had wider lapels and waistcoats were adorned with metal buttons and patterns. The sack coat — a loosely fitted jacket — was also introduced. Cravats were heavily starched and tied in asymmetrical fashion during the early 1850s, but toward the end of the decade, softer cravat styles emerged.

Men’s clothing of the 1860s featured single-breasted and semi-fitted coats and jackets that fell to the mid-thigh. Waistcoats during this decade came without collars. Men also wore their collars highly-starched with neckties and elaborate cravats during the earlier part of the century, and by the late 1860s, string-style cravats that were more narrow emerged.

Every fashionable gentleman could be seen wearing narrowly tailored sack suits during the 1870s. Frock coats were still considered fashionable for daywear, as well. And even though matching suits were still worn, men’s fashion began to shift toward mismatched separates. Very slim cravats with tiny bow ties were also popular.

Photo credit: Wikimedia Commons
What to look for: Lighter-colored trousers and black coats. Tiny bow ties and slim cravats. Semi-fitted coats and jackets, buttoned high. Stiff shirt collars with tips turned down. Hair parted in the center. Many type of facial hair: full mustaches, full beards, walrus mustaches that droop down and are oiled.
Tip: During the 1870s it was rare to see a man with a clean-shaven face.

Lounge suits continued to trend well into the 1890s with trousers sporting creases down the front. Older gentlemen still wore frock coats, but younger conservative men would sometimes do so, as well. Shirt collars were still worn high and starched with tips turned down into wings during the earlier part of the 1890s. Collars were then worn down with long, knotted ties during the latter part of the decade.

Victorian era fashions drew to a close in the early 1900s to make way for Edwardian era styles. Due to the growth in the fashion industry, the ability to mass-produce clothing made it more affordable for any man to be fashionable — not just the elite. Norfolk jackets were introduced during this time period and sack coats were still worn over evening attire. Cuffed trousers were also fashionable during the early 1900s.