You are here:
Leave a commentJewish genealogy 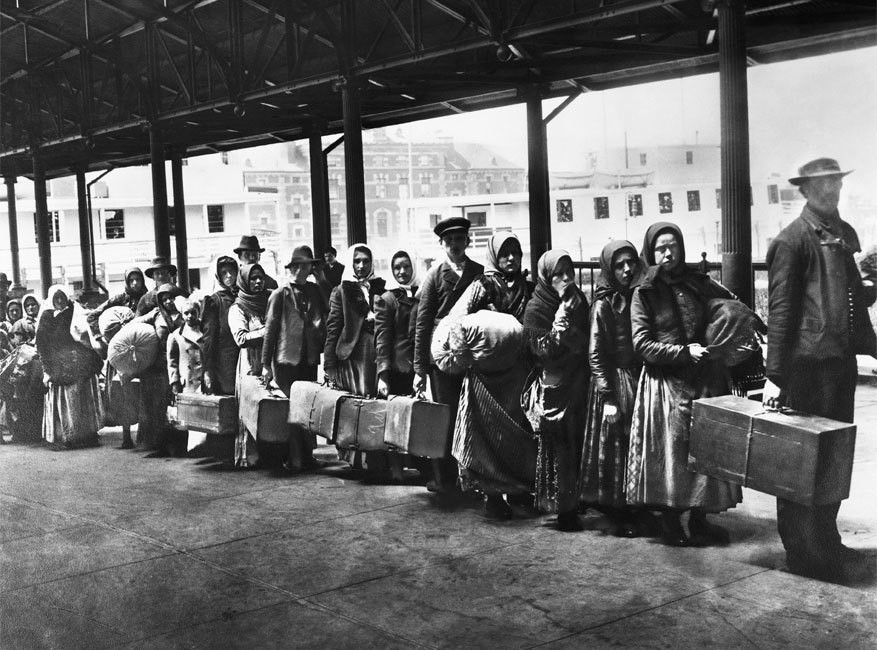 Author’s Note: This series focuses on Jewish genealogy in Eastern Europe and North America, and is intended to offer advice for researching families of Ashkenazi heritage. The information provided will not necessarily apply to Sephardi or Mizrahi genealogy.

In my most recent post, I imparted a sad account of many—but not all—hardships that were placed upon Jewish people living in Russian Empire-controlled areas of Eastern Europe, spanning roughly 125 years. The brave readers who made it to the very end of that ‘litany of woes’ will recall my little cliffhanger about mass emigration.

It is generally accepted that Russian-Jewish subjects began to flee the Empire en masse in 1881 – the year Tsar Alexander II was assassinated. While the tsar had taken certain, specific actions to roll back some of the more egregiously anti-Semitic practices which the Russian government had adopted since his great grandmother Catherine II’s reign, his predecessors had done more social and economic damage than Alexander II could reverse in one lifetime. Generations of government-mandated oppression had forced the population into poverty. Narrow restrictions on where Jews were permitted to live brought about overcrowding in the Pale of Settlement. Starting in 1827, all able-bodied Jewish males aged 12-25 had been targets for compulsory service in the Russian army, which in turn forced many boys to flee as they came of age – or whenever their shtetl ran out of other eligible youths. It was Tsar Alexander II who, in 1856, finally abolished conscription of Jewish boys under age 18. However, that did not stem the outflow of young men wishing to avoid compulsory military service in the Red Army.

Following the tsar’s death, a surge of devastating pogroms swept through the Pale. It was finally time for Russian Jews to make a grand exit. Between 1881 and 1924, over two million Jews left the Russian Empire and neighboring Romania and Austria for the United States. Truly, the term “mass emigration” is not used lightly!

While the period of expanded conscription had seen a steady flow of Russian Jews arriving in North America, this time around, whole families—from infants who would never know shtetl life to old folks who would never learn English—made the trip. It was common for Russian-Jewish men to travel to the New World without their families, learn the language, work hard, and send money back home. In this way, they ‘sent for’ their parents, siblings, wives, and children to join them in America.

This massive period of movement by the Jewish population is often divided into two waves—1881-1903 and 1903-1924—each beginning with a two- or three-year spike in violence against Jews in the Pale of Settlement. (It’s important to note that upticks pogroms were not necessarily the catalyst of these migrations, but it’s not outside the realm of possibility that the pogroms acted as a “last straw” for many emigrants.)

Among the first wave was my maternal 2x great-grandfather, Wulf Schifrowitz, who was born in Wylkowyszki, a town in the Suwalki province of Russia’s Pale of Settlement (now Vilkaviškis, Lithuania). He was all of 18 years old when the tsar was murdered. A decade or so earlier, Wulf’s cousins Itzyk and Leiser Schifrowitz had emigrated to the United States as teenagers and changed their names to Isaac and Levi Epstein. They eventually settled in western Pennsylvania, which was experiencing an oil boom.

It’s no surprise that 1885 saw Wulf Schifrowitz departing Hamburg for New York. The passenger departures manifest lists his occupation as “Messerschmied,” which means cutler; a craftsman who manufacturers knives and other tools with small blades. He arrived at New York’s Castle Garden (the precursor to Ellis Island) and headed straight to his cousins in Sheffield, where he joined up with Levi in a dry goods business and changed his own name to William Epstein, for good measure.

Meanwhile, my other maternal 2x great grandfather, Mordukh Kliorin, was living in Minsk (which is now the capital of Belarus). In 1881, Mordukh was about 30 years old and the father of at least seven children with his wife, Gisya Rivka Shapiro. Their youngest boy—my great grandfather, Aaron—was born on March 15, 1882, just after the first anniversary of Tsar Alexander II’s murder, and exactly two months before Alexander III enacted the infamous May Laws.

Although quite certain of his place in the birth order, Aaron never knew precisely how many children his parents had together, and there’s good reason for that. The Kliorin clan was a relatively small Jewish family with a very ‘dodgy’ pattern of behavior. That is, they had a pattern of draft dodging.

The 1880 Minsk draft evaders list is the earliest document of this variety that my family has located, so far, which includes a Kliorin cousin. That year, 21-year-old Berko Kliorin, first cousin to Mordukh’s father, failed to report to the Minsk Town Administration for conscript registration. Why? He was already on his way west. He eventually departed Hamburg in 1888, arriving in the United States at the Port of New York.

Mordukh died around 1898, but his sons were prepared to follow in their cousin’s footsteps. Below are a couple examples of “draft dodging” notices, one for my great grandfather’s elder brother Shlyoma (1902), and the other for Aaron himself (1904):

By the time Aaron’s draft evasion was reported in the local newspaper, he’d already been in New York for six months, and changed his surname to Klarin. He left at a crucial time for Russian Jews. The Kishinev pogrom had erupted in the spring of 1903, and its three days of devastation were widely reported in the Western world.

Aaron’s siblings were part of the second massive wave of Russian-Jewish migration to America. They followed him in very quick succession: brothers Shimon and Itska in January and December 1904, respectively, their little sister Khaina in September 1905, eldest sister Gitla in September 1907, and finally Girsh–with his young daughter–in October 1908. (In years of research, my family has not had any luck in tracking down Yankel and Shlyoma.)

Each new arrival had to provide the inspectors at Ellis Island with the name and address of a family contact in the United States, which researchers can usually find on the second page of any given arrivals manifest.

[For those readers who like to tie up loose ends: Aaron Klarin’s mother, Gisya, remarried and stayed in Minsk for the rest of her life. She continued to communicate with her children by letter until about 1941, when the German army captured Minsk. It is presumed that she was in her 80’s at that time and almost certainly did not survive the war, but her children did not attempt (or, perhaps, even wish) to learn her ultimate fate.]

Searching for immigrant ancestors is never easy, especially when they neither spoke English nor used the Roman alphabet. Tracking down a traveling ancestor can often feel like looking for a needle in an Earth-sized haystack. If we understand migration patterns and the many contributing factors for each instance, that knowledge may help to make that haystack just a little smaller. In the end, even if we don’t find what we’re looking for, simply knowing what life was like for our forebears gives us a way to connect with them and truly tell their stories.

Click here to receive help from an expert with your Jewish genealogy research.

Jewish Genealogy Series: Given Names, Here and There
December 8, 2017

Jewish Subject Rights in the Russian Empire and the Kingdom of Poland
July 27, 2017
Leave Comment