You are here:
Leave a commentcemetery symbols 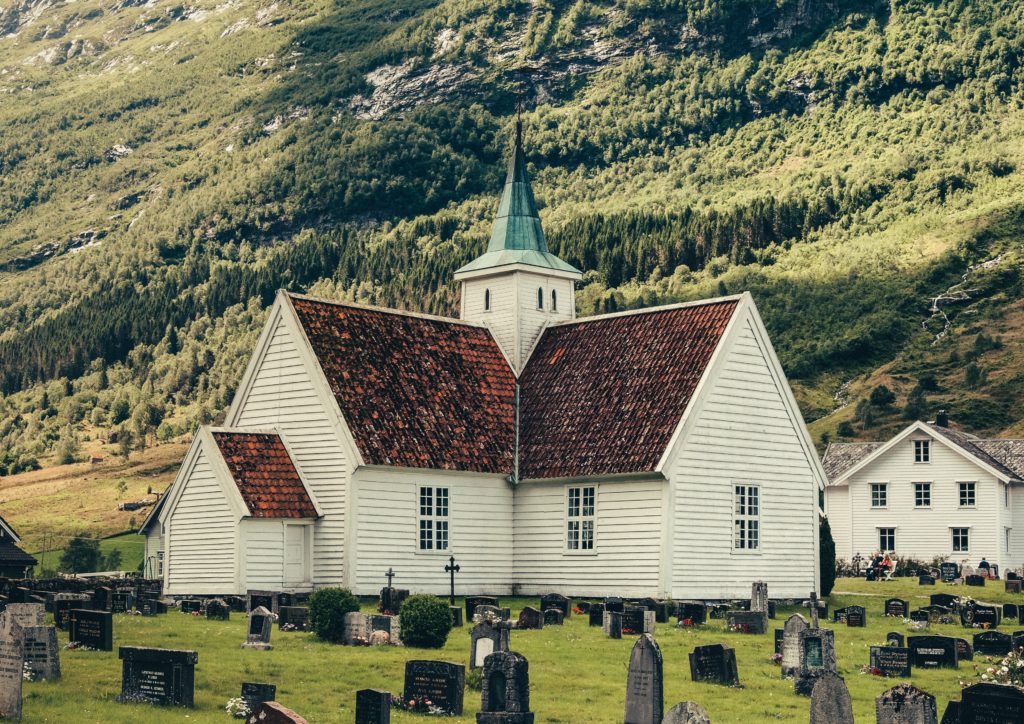 This post is written specifically about Christian headstones/symbols. Other religions do not have the same images.

I’m a cemetery stalker.  You can usually find me there on my free time.  I love to decipher the headstones and imagine who is buried there, each stone telling a different story.  I’ve learned a few things about headstones over the past 25 years—the craft, the cultural significance and the lifestyles of the departed.

Headstones or gravestones have been used for millennia to mark the passing of the deceased.  From simple etched field stones to elaborate mausoleums, the final resting place of the deceased is meant as a remembrance of the individual.  The last few centuries have seen a boom in headstone artistry.  By recognizing the type of carvings, you can estimate when the headstone was carved or erected, in cases where dates are missing.  Some of the more common images include:  Angels, Arched or Curved Headstones, Arrows, Benevolent Society or Organization symbols, Bibles, Coffins & Urns, Crosses, Crowns, Death’s Head, Father Time, Fowl, Gourds, Hourglasses, Lambs, Mermaids, Portraits of the Deceased, Scythes, Soul Effigies, Tree of Life, Trumpeters, Willow and Urn, and Wine or Grapes.

Early headstones were usually arched or rounded at the top.  This symbolized an archway the deceased must pass through to their heavenly reward.  More modern headstones may still keep an arch, but tend to favor a flat or square top, as it is easier to produce.

New England headstones from the early 1600’s to 1700’s usually reflected a Puritan influence.  Common symbols included the toothy winged death-head, symbolizing deaths’ victory and our mortality.  Epitaphs usually emphasize man’s mortality and death.  The carvings tend to be more morbid by today’s standard than our modern-day etchings and epitaphs. 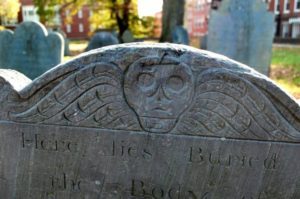 By the mid 1700’s, the death’s-head was replaced by a more friendly winged cherubic head or soul effigy, mainly because religious views ‘softened’ concerning death and eternal rewards.  Hourglasses, scythes and cut or broken flowers also indicated our limited time here on earth, and epitaphs during this period tended to emphasize a more positive life and heavenly reward. 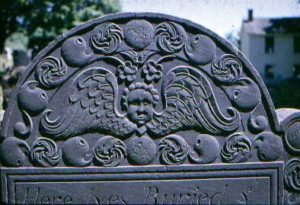 By the early 1800’s, the winged cherub or soul effigy was widely replaced by the urn and the willow.  The urn represents our mortal remains, and sometimes has a flame protruding from the top, indicating the soul ascending heavenward.  The weeping willow symbolizes the sorrow and mourning and also the joy of the afterlife.  Epitaphs tend to include “In Memory of…” or something similar, usually of a more hopeful afterlife.  Obelisks were also common during the late 1800’s and into the 1900’s. 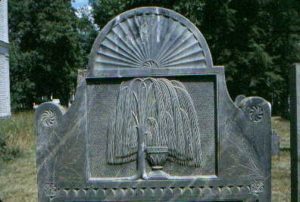 Benevolent Societies or Organizational logos became more popular from the late 1800’s to the present.  Some examples are the Masonic Lodge square and compass, Woodmen of the World (WOW) log or tree headstones, the Elks Lodge and even military battalion symbols.  Each of these clues can possibly lead you to additional records (i.e., newspaper clippings and photos of accomplishments of the society and military histories and records). 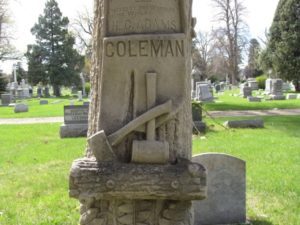 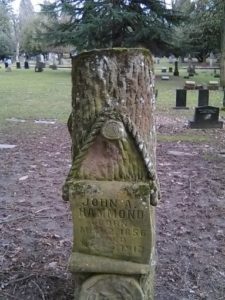 Detailed Woodsman of the World headstone. Note the carvings of the tools of the woodsmen trade.

I recently visited the Lone Fir Cemetery, one of the oldest cemeteries in Portland, Oregon (first burial in 1846).  I snapped photos of some of the beautiful examples of markers there. 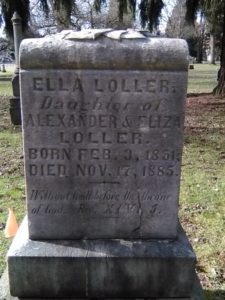 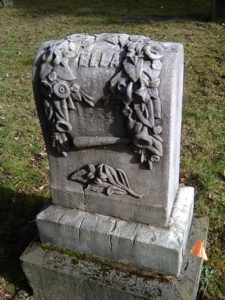 Grave of Ella Loller (1851-1885). A typical example of the period showing a more “positive” epitaph by quoting scripture, plus the use of flowers on the backside. 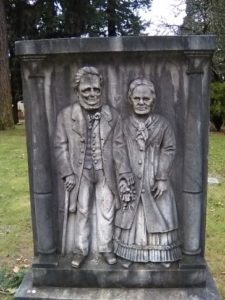 Grave of James B. and Elizabeth Stephens. A beautiful piece showing full-bodied portraits of the deceased (I visit them each time – I call them my adopted grandparents!). 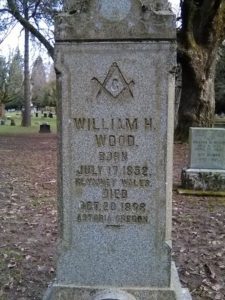 Grave of William H. Wood (1852-1898) showing the use of the fraternal Masonic Lodge square and compass symbol.

Usually the larger and more elaborate the headstone, the wealthier the family was.  This clue can help you determine if there are additional records you may want to research.  If they were well-off, then there are usually property, taxes, wills and probate records you can find.  If the family were merchants, then they may have advertised in local newspapers or received or sold merchandise that may be on cargo manifests.

There are too many symbols to list here, and resources at your local library or at the cemetery itself will be invaluable.  Here are a few of my favorite reference sources:

Stories in Stone: A Field Guide to Cemetery Symbolism and Iconography by Douglas Keister

Stranger Stop and Cast an Eye: How to Make Gravestone Rubbings and Castings and Interpret Their Imagery by G. Walker Jacobs

And of course, a basic Wikipedia search on “Headstone” ( https://en.wikipedia.org/wiki/Headstone )

So friends, “Happy Cemetery Stalking” to you!  And if you’re lucky, maybe you’ll find a little humor amongst the headstones! 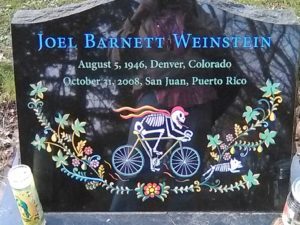