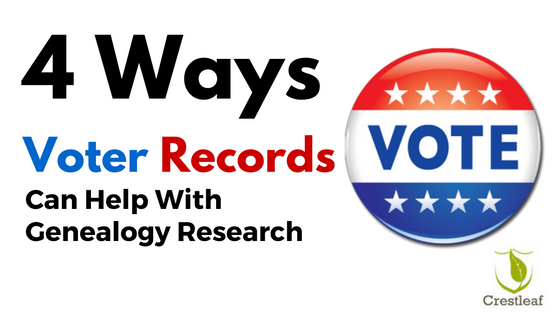 During this election season, you are probably thinking more about who to vote for rather than the information you provided on your voter registration form. But if you take a closer look at the details these forms collect, you will soon realize that voter records hold a treasure trove of data that can be helpful in building your family tree.
And just as many of us have the privilege to vote in America, so did many of our ancestors who came before us. While United States voter records are often overlooked in the genealogy research process, they may lead you to one or more unknown ancestors, clues that provide you with direction if you run into a brick wall, and a slew of other genealogical discoveries.

Information You May Find in Voter Registration Records:

It’s important to note that United States voter registration records were typically kept after 1870. But there are sometimes exceptions. Additionally, voter records usually aren’t found online, but don’t let this deter you! State archives, your local library and historical societies can all be readily searched either in person or through the world’s largest family history research firm, Genealogists.com. Sometimes, you may be able to locate the record using an online catalog search. Cyndi’s List provides links to a variety of location-specific voter registration records. More likely than not, you will need to step outside the comforts of home to find the voter record in question or request that Genealogists.com perform the search for you.

Because United States census records are only updated every ten years, this can cause you to run into some genealogical research hurdles. Think about it: When you move, you have to update your voter registration. So if your ancestor changed their place of residence within those 10 years, their voter record can show you updated information that can be helpful to your research. Voter registration records can also tell you whether your ancestor’s occupation changed within that timeframe and much more.

Find Middle Names of Your Ancestors

Voter registration forms usually ask for a complete name. And sometimes, voter records may be the only place you’ll be able to find a middle name. Middle names are important to your genealogy research as they may offer significant clues about certain ancestors. Sometimes you will even discover that what you thought to be an ancestor’s middle name is actually part of their first name (like Mary Anne or John Paul). Or you could find that an ancestor’s middle name was used as if it were their first name (Jonathan James Davis may have gone by James Davis). Surnames may also be used as middle names for both male and female ancestors. This may happen if a mother’s maiden name was used for a middle name.

After August 1920, all American women were eligible to vote. So if you have elusive female ancestors who were United States citizens at the time, you could look for them within voter registration records after that date. You may even discover a female ancestor you never knew you had! This is because if registered voters lived together, you may find a female spouse listed on a record. For example, Mrs. Anna Peters may be married to someone named Benjamin Peters who was registered at the same address. From there, you would want to search for more evidence that they were married. You may also find that they were related in another way such as a mother and son, or a brother and sister.

It can be difficult to learn about your African American ancestors. In fact, you are likely finding it even harder to locate certain records than those who don’t have the same ancestral roots. Accurate record keeping for African Americans prior to the Civil War was not very common.  The 1867 registration of voters in the United States was the first to include valuable genealogical information on emancipated black citizens. Try searching personally (or have Genealogists.com search) the state archives for voter records from 1867 through1869 to find names and other data on registered voters.
Additional resources for finding African American voter records:
These are just a few of the fascinating findings that voter registration records can provide. Naturalization information, political affiliations, physical characteristics of your ancestors, and more may also be found within certain United States voter registration records.

Have you started researching American voter registration records? What have you discovered about your ancestors? Let us know!