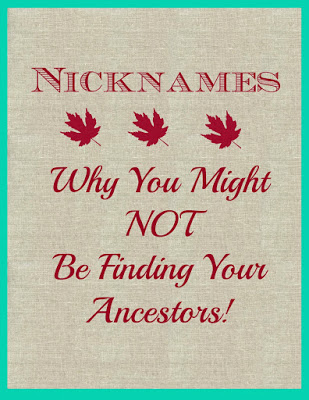 Does the use of a nickname by your ancestor prevent you from finding him or her in the records? An individual can (and often is) found in genealogical records using either a given name or a nickname.
Nicknames are not new and have been around for some time. Typically, they can take on a shortened form of a formal or longer name. For example, John is the shortened form of Johnathan. And Eliza is a shortened form of Elizabeth.
These particular examples are easy connections to make.
But what about less common nicknames?
Use the following tips for finding your ancestors using nicknames to never miss a family member in genealogy records again!

Now just to make things a little more confusing…
Family nicknames that have no logical explanation outside of the immediate family can also be given to some individuals.. For example, Elton Carr Dixon Finley was known to her family as “Tutta.” This was a name given to Elton by her younger sister. Because Elton’s younger sister wasn’t able to pronounce ‘sister’ correctly, she called her Tutta and the name stuck for 60+ years. While interviewing other family members about Elton, there was much confusion about exactly who Elton was. Few in the family remembered her real name and only knew her by her nickname.
Old family photographs can often be labeled using an ancestor’s nickname, as well. These family records are informal and can be a source of someone’s nickname (or the source of much confusion!). For example, a known photograph of Lester Howard (of Lee County, North Carolina) is simply labeled “Bill” on the back. Bill?! Was this a mistake? Not at all. Bill was the nickname Lester’s father called him. No one knows why, it just was. Fortunately, older family members remembered this and cleared up the confusion. Any Howard photographs or personal records referring to Bill are now known to be referring to Lester.

Memorizing all the nicknames your ancestors may be known by is not possible. Fortunately, many good lists of common (and not so common) nicknames can be found on the internet.
These nickname resources are a few I tend to use when confronted with an ancestor and the possible use of a nickname.
Don’t miss your ancestor in the records just because a nickname was used! With just a little extra research many nicknames can be figured out.

What unusual nicknames have you found in your research?

About Lisa:
Lisa Lisson is a genealogist, blogger and Etsy-preneur who writes about her never-ending pursuit of ancestors, the “how” of genealogy research and the importance of sharing genealogy research with our families. Specializing in North Carolina and southern Virginia research, she also provides genealogical research services to clients. In researching her own family history, Lisa discovered a passion for oral history and its role in genealogy research.
When not tracking ancestors through the records, Lisa enjoys spending time with her husband and two “almost” grown children.
You can find Lisa online at LisaLisson.com, Twitter, Pinterest, and her Etsy storeEsther’s Place – Heritage Inspired Gifts

This entry was posted by Crestleaf in Genealogy Resources, Genealogy Tips, Social Media Genealogy and taggedfamily history tips, genealogy tips, social media genealogy on May 27, 2015 by Natalie L..Like what you read? Subscribe to the Genealogists.com blog above and automatically receive our next article.