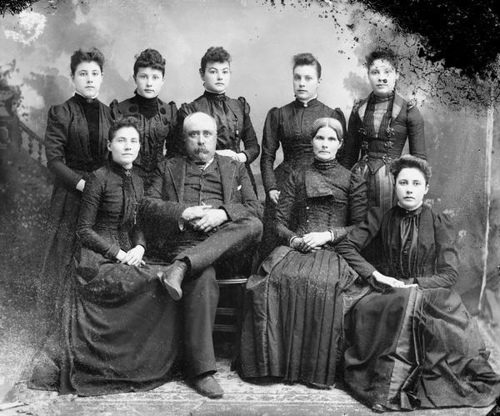 If you’ve been researching your family history for a while or just beginning the process, you’ve likely caught the genealogy detective bug. But even if you’re the best genealogy sleuth of the bunch, you can still often run into some brick walls, especially when  attempting to identify family members in photos from the Victorian era. During the span of the late 1930s and up to the 1900s, it can be difficult to decipher which decade those vintage photographs were actually taken as hair and clothing styles looked much the same.

Photo Credit: Wisconsin Historical Images via Compfight cc
But just as you can date photographs by photo type, you can also identify ancestors and date photos by equipping yourself with the knowledge of women’s hairstyles of yesteryear.
Knowing how to identify Victorian era female hairstyles can be one of the most surefire ways of dating old family photos. Remember, however, that the descriptions below are generalities and you very well could stumble upon exceptions to these rules.

When Queen Victoria ascended to the throne in the late 1830s, her style had a heavy influence on trends in women’s hairstyles in the 1840s.

“Thomas Sully 001 detail 1″ by Thomas Sully – The Yorck Project: 10.000 Meisterwerke der Malerei. DVD-ROM, 2002. ISBN 3936122202. Distributed by DIRECTMEDIA Publishing GmbH.. Licensed under Public Domain via Wikimedia Commons
What to look for: Ringlets and coils with ears hidden by puffs, with hair parted down the center. Topknots were also worn toward the back of the head as opposed to the front (an 1830s style).

Photo credit: 1840s Hair Dos
Tip: If you see a female child with hair parted on the side from this time period, it was likely a boy dressed as a girl.

In the 1850s, photography was still considered a new technology. But as photo processes became more advanced and less expensive with the introduction of ambrotype portraits, women wanted to look more sophisticated in their photos.

Photo credit: gracefullady on Flickr
What to look for: Hair parted in the front with a bun set back halfway. Sides of hair should be smoothly waved and ears still hidden by puffs. Puffs were worn bigger in the evenings with thin ringlets coming out of the bun at times.

Photo credit: cynthiarxx on Pinterest
Tip: Look also for modestly-sized caps with flowers and ribbons dangling from the bun, as well as flat-lace caps set back far on the head with tapered ends and long tails on the sides.

The 1860s saw some of the same hairstyle trends as the 1850s but changed somewhat with the hair still parted center, but those familiar “puffs” soon disappeared.

Photo credit: The Winding Ascent
What to look for: Hair parted down the center with hair drawn behind the years tightly into a bun worn at the back of the head, sometimes with lace, flowers, netting or arranged in braids and loops. If hair was worn over the ears, puffs were no longer worn. Bangs were also obsolete. Female children wore their hair similarly at times, but with just one side curled and puffed, held in place with grease. As the 1860s progressed, the front of these hairstyles began to lose their parts, with hair falling around the face and curled into ringlets then combed.

Photo credit: meganmiso on Pinterest
Tip: Formal hairstyles were rounder and fuller in the back and the sides, often enhanced with false animal hair, ribbons, silver, gold and other embellishments.

In the 1870s, women took elegant, feminine fashion cues from Queen Victoria and well-known actresses as the decade advanced.

Photo credit: UVM.edu
What to look for: Hair that is pulled back at the sides showing the ears in full. Shorter styles were also introduced, but knots, ringlets and additions of false hair supplemented the shorter styles. Bangs also came back. Elaborate hairstyles with lace, ribbons and flowers.  Mullets were also introduced during this time period with long tails down the back and a high top with the sides of hair pulled back.

Photo credit: Photo Tree
Tip: If you had family members from the “Wild West” hair was typically worn longer over the shoulders and back and often curled.

Fashionable hairstyles for women in the 1880s became increasingly shorter and more man-like as the demand for survival far outweighed the importance of elegance, yet styles still came with feminine touches.

Photo credit: UVM.edu
What to look for: Shorter hair, pulled back from the sides pulled on top of the head or curled into ringlets. Shorter bangs were sometimes cut for an extra feminine touch and ears were shown. Longer hair was also still worn in some societal circles but considered uncivilized. If hair was longer, it could be worn in buns off the face.

The hairstyles of the 1890s reflected the lives of the women living in industrialized nations as either mothers or workers if they were without children.

Photo credit: Barrinton House, BartosCollection.com
What to look for: Longer, feminine locks were worn by those women who lived a more leisurely life. Buns were also worn further back with ringlets and shorter bangs if the woman was a worker.

Photo credit: Digital Collections, The New York Public Library
Tip: Look for huge hats that were introduced in the 1890s with larger-than-life feathers.

The optimistic, science-driven, post-Victorian world emerged in the 1900s and hairstyles reflected these new advancements.

Photo credit: mote history
What to look for: Full, and large hairstyles — this goes for long and short hair. Long, flowing curls. Sausage curls and ringlets worn down or in pompadour style (back of hair pulled into a flat coil then drawn onto the crown of the head).
Have you stumbled upon these hairstyles while looking at old family photos? Let us know in the comments! Now that you’re equipped with women’s Victorian era hairstyle knowledge, add those old family photos to your Crestleaf Family Tree!