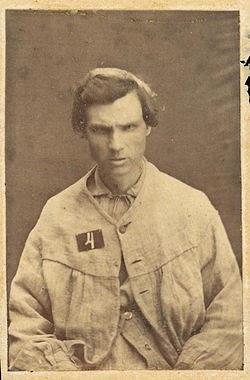 Have you ever been exploring your family tree when
a rotten apple falls down and hits you on the head? Most of us have at least
one ancestor with a checkered past. Some of our ancestors have even spent time in jail. Do
you know how to uncover a criminal past? Do you know the types of records to
explore?
Take as an example, William B. Schwartz, a man who faced the choice of financial ruin or a life of crime. Ultimately, he chose a
life of crime, and inevitably, he was caught. His name is found in the Leavenworth, Kansas, U.S. Penitentiary, Name
Index to Inmate Case Files, 1895-1936 database at Ancestry. The same list
is also published on the website of the National Archives at Kansas City. But finding a name in such an index barely scratches the surface of the bigger
story. In most cases, it starts with the question – what did your ancestor do
to end up in Leavenworth? Most records in these situations are not found online
and must be accessed from a wide range of repositories to learn the whole
story.
In
the case of William B. Schwartz, he began his life in Ohio, but moved to
Indiana as a young man. He started a promising career as a lawyer and as an
inventor, but then things went horribly wrong. His wife was judged insane and she
was confined to an asylum for the remainder of her life. The medical bills bankrupted
William. He tried to sell property he owned jointly with his wife, but could not
because she was not legally competent to co-sign them. He sued for divorce but
the judge denied him because being insane was not a legal ground for divorce in
the early 1900s. As an inventor, William was skilled in metalworking. He
eventually made his own coin plates and turned to counterfeiting to supplement
his income. It took the Federal agents five years to catch him. William’s story
was rediscovered through a wide variety of records, some of which were found
online after much digging and extensive research, but many of the key documents
were found in repositories throughout the Midwest.

The records and documents related to any criminal
case are rich and plentiful, provided you know where to look. Most records are not found
online, including the complete inmate files. In Federal cases, inmates were
often sentenced in their city of residence but incarcerated in the nearest
federal penitentiary, which could be located across the border in another state.
Penitentiary records are not necessarily located at the same National Archive
as the trial records. Many different types of records can tell the story of
your ancestor’s checkered past. These can include newspaper articles, published
biographies, land records, court documents, sheriff’s records, guardianships, and so on. Each new document found will add depth to your ancestor’s story.
Using the network of researchers at Genealogists.com can help you lay to
rest those nagging questions regarding the rotten apple in your family tree.