Anatomy of a Social Security Number

You are here:
7 CommentsUncategorized 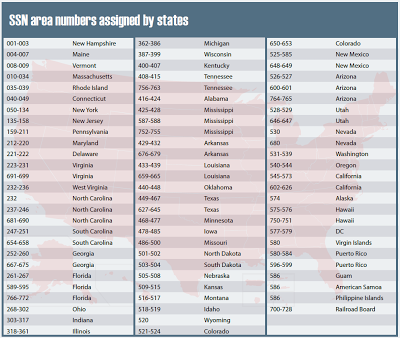 By knowing just the first three digits of someone’s SSN, you can correctly guess their birth
state.  The nine-digit SSN has
been used since 1936 to track a person’s wages for the purpose of accruing
benefits with the Social Security Administration.  The SSN has 3 sections.
Area Numbers
The first three digits of
the SSN are called the area numbers.
This is because they originally corresponded to the state that a person
lived in at the time they were issued their SSN.

Beginning in 1972, the
area numbers began being assigned based upon the zip code in the mail address
to which the individual requested his or her card to be sent.  Thus, it is possible for someone to reside in
one state but ask that the card be returned to another states, thus rendering
the area number less than area specific.

Digits four and five in
the SSN are referred to as group numbers.
They identify the block of numbers currently being issued.  As an example, the SSNs 123-01-0001 through
123-01-999 would all be issued before moving on to the next group number.
Serial Numbers

Digits six through nine
are known as serial numbers.  They are
issued consecutively from 0001 to 9999.
By dissecting someone’s
SSN you can learn the state in which they lived when they applied for the number
for those SSNs issued prior to 1972 and the state noted in the return address
for those applied for after 1972.
In some cases, letters may
appear after a social security number .
For example, I have a California death certificate that reports a social security number with  an “A”
appended to the end of the number.  For example:
“000-00-0000A.”
The Social Security
number followed by one of these codes is often referred to as a claim
number.  The SSA assigns these codes once someone applies for
benefits.  These letter codes may appear on correspondence from
Social Security or on a Medicare card.  They will never appear on a Social
Security card.
For example, if the
wage earner applying for benefits and your number is 123-45-6789, then their
claim number is 123-45-6789A. This number is
also be used as their  Medicare claim
number, once they become eligible for Medicare.

NOTE: This list is not
complete, but shows the most common beneficiary codes.

Content for this article is from CR80News Fall 2008 and from the Social Security Administration.