You are here:
6 CommentsUncategorized 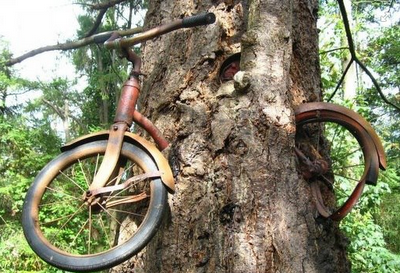 The story
about the boy is not true.
Unfortunately, you would be amazed at the number of people who saw the
picture, read that caption and believed it.
This led us to think about what similar mistakes people make while
researching.  Here is what we came up
with.
1. Don’t believe everything you see
or read.

One of the
biggest mistakes beginning researchers make (and even some who have been
researching for a while and should know better) is copying down the information
they find in family trees—such as those on Ancestry.com or
newFamilySearch and accepting it as gospel truth.
If you see something in someone else’s tree
that interests you, make a note of it and use it as a clue, but only as a
clue.  Ask the person who submitted it
WHERE they got the information.  If they
can’t tell you, use the information to lead you to an original source.  Just because the person doesn’t have a source
doesn’t necessarily mean it is incorrect.  What it does mean is that you can’t use it with
complete confidence until you find a concrete source.
Always
look at even official documents with a skeptical eye, especially census
records.  There are many mistakes on
census records, both intentional and unintentional.  Even though the 1850 Census states that John
Doe was born in Georgia in 1818, you should continue to search for corroborating
evidence.  Even after you locate a
source, you should still scrutinize it.

2. Always document WHERE you got
EVERY fact in your tree.

Not
documenting (sourcing) is the #1 mistake beginning researchers make.
If you don’t record the location in which you
find something, it will come back to haunt you later.  Whether you find Fred’s date of birth on a
tombstone or on a little slip of paper that was among your grandmother’s personal
effects, you need to document it.  There
is a standard way to document your sources but when you are first starting out,
the rule of thumb is to make sure you document enough information so that
anyone who follows your research path can locate the same source.
Indexes are
a great resource, but don’t forget to obtain the original documents whenever
possible.  You wouldn’t believe how many errors
exist in indexes.  Indexers are human and
handwriting or faded print can be hard to read.
Since you will be familiar with the persons involved, the time period
you are researching, and the location where the events occurred, it is less
likely that you will make a mistake.
Indexers do not have this advantage. You will be able to identify names that
are spelled incorrectly as well as dates that are inaccurate.
When a marriage document contains a
license and a certificate on the same page, you may not be able to determine whether
the date marked on it is the date the indexer recorded the license or the actual
date the marriage occurred.  For various
reasons—such as repositories destroyed by fire or other natural disasters, and
otherwise damaged or lost records— you will on occasion not be able to obtain
a copy of the original document.  In such
cases you have no choice but to rely on the index for information.  [Recently, my research firm Rootsonomy located the marriage index for one
of our clients’ ancestors, but could not find the actual vital record.  The original document apparently was lost
sometime after the marriage.]  This also
happens frequently with old cemetery surveys.
If the marker is no longer there, the survey will be the only
information available to the researcher.
The bottom line: find as many original documents as you can but if an
index or other secondary source is all you can locate, remember to proceed with
caution.  Just as with a family tree, the
index will be a clue to point you in the right direction, but should not be the
ultimate goal. 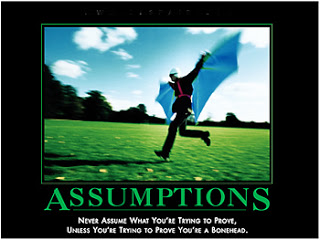 If you have
two men in the same county who are listed as John Smith, Sr. and John Smith,
Jr. don’t assume they are father and son.
In earlier times it was common for men of the same name in different
generations to be labeled Sr. and Jr. even if they weren’t father and son.  They could be uncle and nephew, or not even directly
related.
Other assumptions you shouldn’t
make are husband/wife relationships and parent/child relationships on census
records prior to 1880, when relationships were first recorded.  This error can really lead you down the wrong
path.  Consider the example of an
unmarried sister who moved in with her brother, whose wife recently died, to
help him take care of the motherless children.
The brother and sister would have the same surname and be only a couple
of years apart in age but assuming that they are husband and wife would be a mistake.
The same holds true with children.  It is impossible to determine if all the children
listed on 1850 Census records belonged to the adults whose names appear as the heads
of households.  Those children listed
below adults’ names could be orphaned nieces and nephews, grandchildren,
stepchildren, etc.  Don’t assume
anything.  You can theorize about the family
unit’s makeup, but you need to locate other records in addition to the census
to prove
the relationships.

4. Don’t rush backward in time.
For some researchers
it appears to be a race to see how fast they can get their lines as far back in
time as possible.  It is far better to
have four generations that are solidly documented, than ten generations that
are shakily constructed.  When someone
tells you they have traced their ancestry back to the 1100s, be VERY skeptical.
If a prize is to be awarded, it should be
given for the tree with the strongest roots, and most often, strength is based
on abundant descendancy research.  In
addition, we have often found that the stronger the foundation, the more likely
we are to take the lines further back.  Remember
that many trees branch out in other directions rather than straight up.  The strength of these trees results from researching
a side line or that of extended family members.

5. Don’t assume you are related to
Abraham Lincoln.

Just because you have
the Lincoln name in your family tree, does not mean you are related to the Abraham
Lincoln.  The same holds true for any
famous person.  If there is a legend in
your family suggesting that you are related to Jesse James, don’t use his descendant
lineages in an attempt to establish connections to your family tree.  You may be setting yourself up for disappointment
and frustration. You MAY be related to a
celebrity or even to royalty, but the only way you will ever find out with a
certainty is by employing a methodical approach beginning with yourself and working
backward in time, one generation after another, documenting every source as you
go.